Ideally suited to assist in the efficient and productive extraction, concentration and processing of any mineral mining operation.

Mining and Mineral Processing is becoming increasingly complex and the MAPSSCADA is ideally suited to assist in the efficient and productive extraction, concentration and processing of any mineral mining operation. With over 5000 seats installed in this industry MAP Scan be found in Coal, Gold, Diamonds, Chrome, Vanadium mines and processing plants across the world and is trusted by many Companies to safely run these valuable and strategic assets.

The MAPS architecture and openness offers Mining and Mineral Processing and waste Mining and a unique capability of not only traditional SCADA/HMI functionality but the ability to integrate all aspects of their operations. Whether the application is Mining, Concentrating, Smelting, Refining  or final product manufacturing MAPS is the ideal platform for this industry. By adopting a more holistic approach to operations management significant savings and operational efficiencies can be realised. And in an industry that manages such a precious resource MAPS is uniquely placed to ensure a superior quality of supply in all aspects of the operations and management of these facilities. 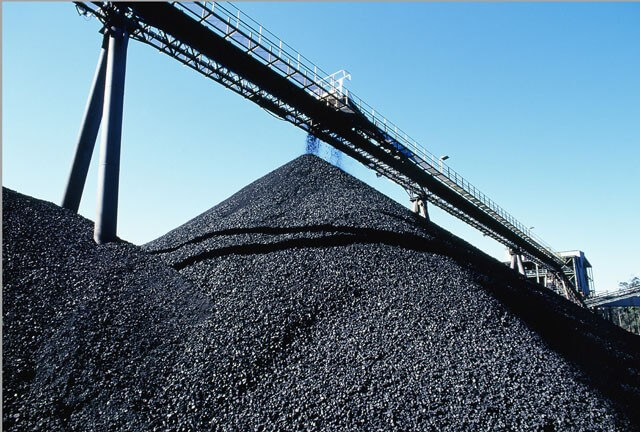 Debswana is the world’s largest diamond producer by value. Based in the country of Botswana the company has operations at Jwaneng, Orapa, Letlhakane and Damtshaa. The main purpose of Debswana is to mine and recover gem and industrial diamonds. Although Debswana uses the most  up-to-date technology to carryout its business, it is The technology, the people it employs and the skills they bring  that makes Debswana a successful operation.

The Damtshaa diamond mine is a diamond mine located in Botswana about 220 kilometers (140 miles) west of Francistown. Damtshaa is of open pit construction, located on top of four distinct kimberlite pipes of varying ore grade. Themine is forecast to produce about 5 million carats (1,000 kg)of diamond from 39 million tons of ore over the projected 31 year life of the mine.

The Damtshaa mine is a subsidiary mine that feed soncentrate to the Orapa complex. MAPS products are used for the control and monitoring of the ore crushers and ore delivery systems.

The Debswana Jwaneng Mine

Jwaneng lies in south central Botswana,160km southwest of Gaborone. Jwaneng Mine contributes 60-70% of Debswana’s total earnings. The mine produces 9.3 million tons per year of ore and an additional 37 million tons per year of waste rock. The mine is located on three kimberlite pipes  that converge near the surface, covering 520,000 square meters at ground level. In 2003, the mine produced 14.3 million carats (2860kg) of diamond. The recoverable ore grade at the mine is about 1.25 carats per ton (250\mg/t).

This unique plant was a project that fully automated the sifting, sizing and sorting of diamonds. The idea being that no human operator would be involved in the entire process. The plant is complex and the control and monitoring critical to the recovery process.

The Debswana Orapa Mine

The Orapa diamond mine is the world’s largest diamond mine. The mine is located in Orapa, a town in the Boteti Sub-District of Botswana about 240 kilometers (150 miles) west of the city of Francistown. MAPS is used on the crushers, conveying, recovery operations, borehole and water recovery as well as the water treatment plants on the mine. The Orapa mining operations are mostly run by hot standby clustered MAPS servers with multiple client licensing. This is a completely automated recovery plant (CARP)that boasts more than one million real-time tags being read from more than- 25 Siemens S7 400 PLC’s.

The Mowana Copper Mine

Mowana is an open pit mine located close to Botswana’s second largest city, Francistown, in the north-eastern part of the country, in an area which has been mined for the past 400 years. An open pit mining operation feeds the process plant. The Mowana plant is standard flotation process technology and has been designed to produce saleable copper concentrates from the treatment of approximately 1 million tonnes per annum of oxide, supergene and sulphide ores.
The process plant has two floatation circuits. Sulphide minerals are separated first, and tailings from the sulphide roughers are sent to an oxide circuit. Most other mineral species are recovered in the oxide flotation process. Concentrates are filtered to recover excess process water, as are tailings. Tailings will be dry stacked. Water recovered in the dewatering stages will be recycled to the various parts of the plant as process water. The

MAPS control system was implemented on the primary, secondary and tertiary crushing plants, milling and floatation process where the copper is extracted with flock and oxides and pressed into copper cakes.

The Manganese Metal Company (MMC) is the single largest producer of pure electrolytic manganese metal in the world. The production facility is located in Nelspruit, in the Mpumalanga province of South Africa. Manganese Metal is manufactured using the process of electroplating and MMC have been using the MAPS SCADA since choosing it as their SCADA/HMI when they upgraded their legacy control system in 2000.

Operations at MMC is currently controlled via 12 SCADA machines each connected to a Programmable Logic Controller (PLC) varying from old Modicon 984’s to the latest Telemecanique Premium PLC’s. The PLC’s are all stand alone but the 12 SCADA machines are connected via an office network.

Samancor Manganese is the world’s largest integrated producer of chrome and manganese units and is 60 per cent owned and operated by BHP Billiton. MAPS is used at a number of the operations including Mammatwan and Wessels mine and the Tubatse Ferrochrome.

The town of Hotazel in the Northern Cape region of South Africa is home to Samancor’s Mammatwan open-quarry manganese ore mine and sinter plant, and Wessels underground manganese ore mine. MAPS is used to run the entire mining operations made up of seven areas. In addition Alarm Management and Analysis and the MAPS SCADA Intelligence are used to drive operational excellence and the mines reporting requirements.

Harmony Gold (NYSE: HMY) is the third largest gold mining company in South Africa , the 12th largest in the world (2009) and the 5th largest gold producer in the world.[1][2][3] Harmony and its subsidiaries conduct underground and surface gold mining and related activities, including exploration, processing, smelting and refining

MAPS is used in the monitoring and controlling of the liquid Cyanide addition into the CIL tanks, and monitors the lime PH in slime as well as tonnage of the slime that is going back to the slime dams after gold extraction.

Saldanha Steel is a compilation of four plants, each with it’s own consumptions and processing functions, namely the Iron making plant, the Steel making plant, the Caster and the Mill. In order to visualize the plants total operations and monitor expensive consumptions, Saldahna Steel installed a stand alone MAPS SCADA HMI as its Central Monitoring System (CMS) with a server located at the Meltshop and an interface workstation located at the Central Services Monitoring Room.

Namakwa Sands undertakes the mining and beneficiation of heavy minerals. The operation is located on the west coast of South Africa and operates facilities at three separate sites. The mine and the concentration plants are located at the Brand-se-Baai, 385km north of Cape Town.

The mining concentrate is transported to the mineral separation plant by truck. The mineral separation plant is located at Koeknaap. Here Ilmenite, Zircon and rutbile are recovered before the products are transported to the smelter by rail. The smelter is based close to Saldanha Bay. Namakwa Sands operates two furnaces where Ilmenite is smelted to produce titanium slag and pig iron. The Namakwa Sands operation started in 1994 and is one of the largest mineral sand operations in the world.

Sandvik Mining and Tunnelling is a high-technology, engineering group with advanced products and a world-leading positions within selected areas. Worldwide business activities are conducted through representation in more than 130 countries.

MAPS is an ideal partner for real-time solutions for mining equipment. A long time OEM customer is Sandvik Mining and Tunnelling that have used MAPS as the HMI for large continuous coal mining machines that are manufactured and shipped out of the manufacturing facility in Zeltweg, Austria` The solution provides real-time visualisation and operations performance management from a surface control room on any number of continuous miners running underground.

Modikwa Platinum Mine is an independently managed, 50:50 joint venture between ARM Mining Consortium Limited and Rustenburg Platinum Mines Limited. The mine is on the border of the Mpumalanga.

Modikwa is a 200 kTPM concentrator with controlled by three Siemens S7-400 “Hot-Standby” PLC’s. State of the art “Profibus”, “Industrial Ethernet” and ASI bus systems have been utilized extensively eliminating the need for any conventional I/O. The plant has a total of 580 drives all equipped with the Siemens Simocode. The flotation plant has

a total of 70 flotation cells that are each equipped with Level control and Air flow control loops. The MAPS SCADA system is “Dual redundant” with automatic switchover in the event of a failure of any component

Highveld forms part of Evraz, one of the world’s largest vertically integrated steel and mining businesses, registered in Luxembourg. Evraz produced 16.3 million tons of crude steel in 2007, making the company one of the 15 largest steel producers in the world.

The sites SCADA system consists of nine 984 PLC’s of various brands. The plants are linked by a Modbus+ protocol network loop, via an SA-85 card driver to the MAPS system. All plant PLC’s use input and output coils configured in MAPS which further map the operations addressing requirements. The intranet network links all PC’s with Ethernet addresses to monitor all network PC’s. The SCADA system is linked via it’s own van SCADA network, with 19 computers on the network and 6 servers. With the addition of the planned chemical plant, the network will consist of a total of 21 PC’s and 8 servers. 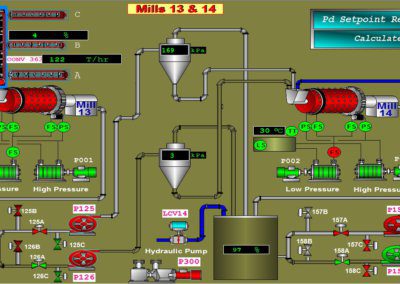 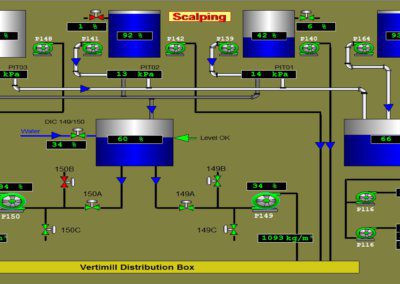 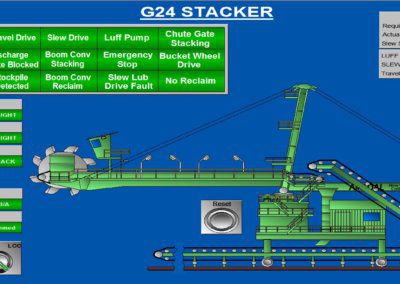 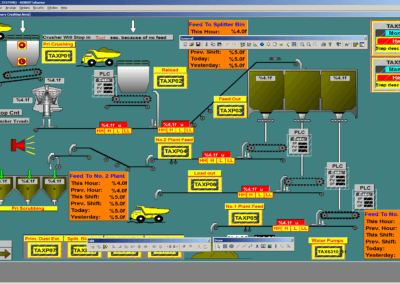 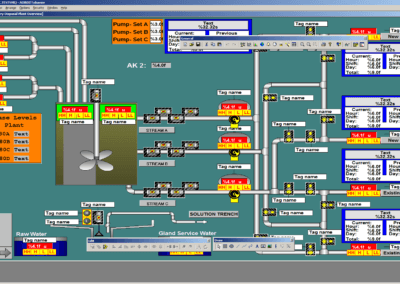 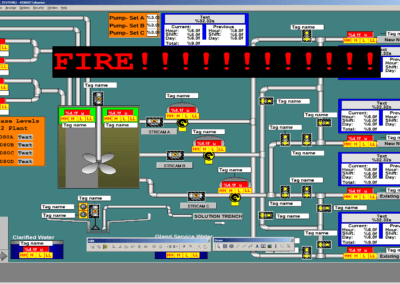 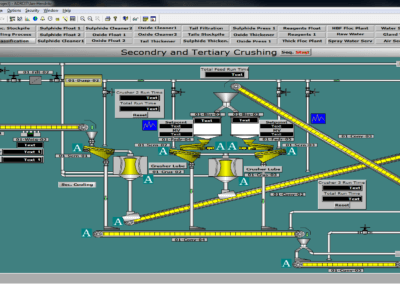 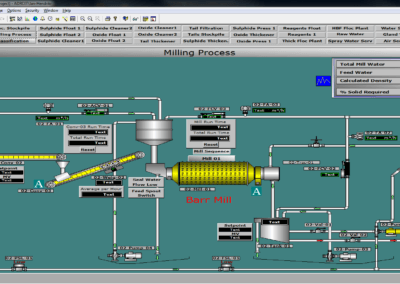 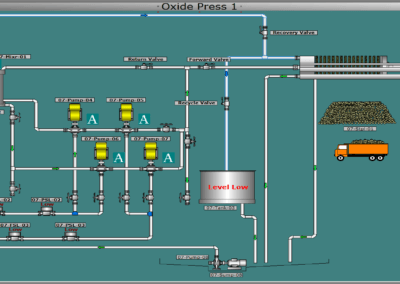 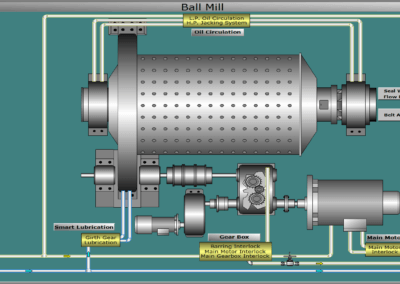 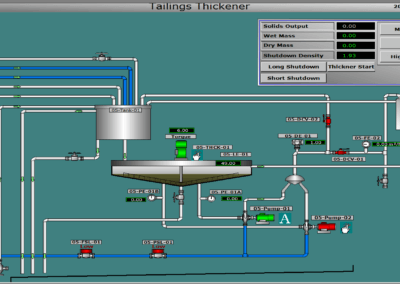 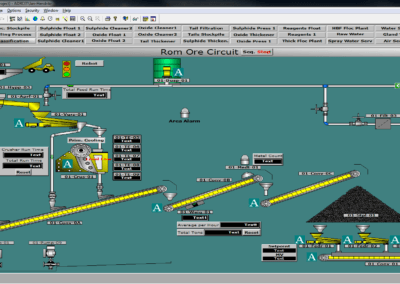