More than 150 type D23 outstations are used in medium voltage distribution stations. The communication with these Remote Terminal Units is based on multi drop private line network and use of the IEC 870 5 101 protocol. Multi drop connections are realized with D09 LTUM active splitters.

The D01 Front End Processor is not only master for the IEC protocol but also for the SEAB1F protocol that has been implemented to connect existing AEG Remote Terminal Units in gas feeder stations, gas district stations and 50kV distributions stations. In addition to the medium voltage and gas distribution tasks the system connects a large number of I/O signals from the district heating supply system.

Co-generation units in the province of Utrecht are connected to the system by means of a separate Front End unit which originally was installed in the early nineties. This FEP communicates to D01 and D23 outstations through the public telephone network.

The Datawatt ELCOM90 Gateway connects the telecontrol systems to the ABB Spider System in the 24 hour manned control room. Another part of the alarm handling and control is realized by Adroit SCADA software which provides information to a number of different users as well. All configurations for outstations, FEP, Adroit SCADA software and the ELCOM Gateway are stored in Datawatt’s configuration tool and database Action. 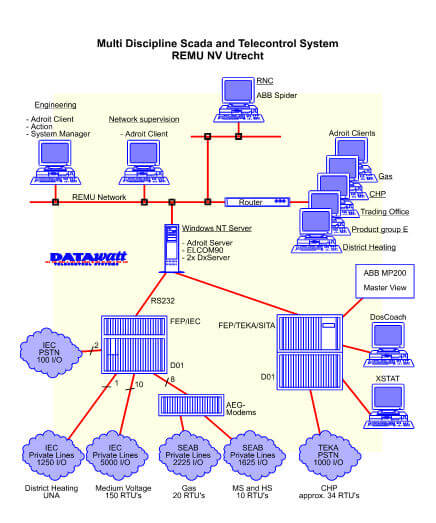